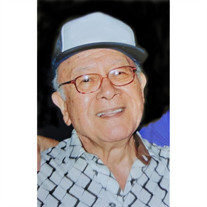 Alfredo Rodolfo Ramirez May 12, 1924 - June 11, 2021 Alfredo was born to Juan Anastasio and Tomasa Romero Ramirez, in Corozal Town, British Honduras (now Belize), the youngest of 11 children. He was named for two older brothers who passed at a young age prior to Alfredo's birth. He attended St. Francis Xavier primary school, followed by nine years of work, and then completed local schooling at St. John's College in Corozal, prior to attending Marquette University in Milwaukee with the assistance of the Jesuit President, Fr. Edward J. O'Donnell, graduating in 1952. Alfredo married Barbara Jane Suter on June 27, 1953, at St. Walter in Roselle, Illinois, after their scheduled nuptial site, St. Peter Damian in Bartlett, was struck by lightning. Together, they raised 10 children while working through the effects of Barbara's debilitating Multiple Sclerosis condition, with much support and love from family and friends. After employment as an import/export agent with Miller Brewing in Milwaukee, Alfredo was invited to join the Insurance business owned by Barbara's father, Francis Suter, in Bensenville, Illinois. He eventually bought out his father-in-law and continued to run the business for nearly sixty years. Alfredo also served the local courts and the village of Bensenville with his translation and interpreter abilities. He belonged to several business and church groups. Alfredo and Barbara and their friends grew a fun First Friday group that lasted for decades, wherein they took turns hosting a monthly gathering after attending Mass. Alfredo was highly committed to being a life-long learner, attending college courses into his 80's and reading a steady stream of books from philosophy and biographical works, to science and politics. He loved to learn and research, to dig down to the essence of a concept or theory or political position and then discuss it. For those who knew, loved, worked, or raised a toast with him, his life was an example of a life well lived.  In his honor in the coming days, his family invites you to share a favorite memory of Alfredo with others who will be remembering and celebrating the life of our wonderful father. Alfredo was preceded in death by his wife Barbara, his parents and all his siblings, Rodolfo, Alfredo, Nita, Nelly, Ernesto, Berta, Raul, Ramon, John, and Tomasita. He is survived by his children Joseph (Lisa), Anna (George "Pete" Howell), Louise (Ray Pelletier), Francis (Jacci), John (Kathy), Michael (Deb), Barbara (Steven Aidikonis), Peter, Alfredo Jr (Joelle), and Patrick (Katie).  He is also survived by 29 grandchildren, almost 28 great grandchildren and 4 great great grandchildren. Eternal rest grant unto him, Oh Lord, and may perpetual light shine upon him. May his soul and the souls of all the faithful departed, through the mercy of God, rest in peace. Visitation will be on Wednesday June 16, 2021, from 3pm to 8pm, at Pedersen Ryberg, 435 N. York Street, Elmhurst, Illinois, 60126. Funeral Mass will be held at 10am at St. Charles Borromeo Church, 145 E.Grand Avenue, Bensenville, Illinois 60106, interment to occur immediately following at St. Michael Archangel Cemetery, 1185 W. Algonquin Road, Palantine, Illinois 60067.

The family of Alfredo Ramirez, Sr. created this Life Tributes page to make it easy to share your memories.