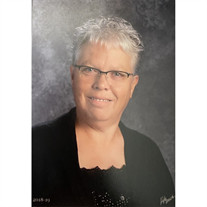 On Thursday, July 30th, 2020, Deborah L. Crader (nee Wehrenberg), loving partner and mother, left us just shy of her 60th birthday.  Deborah was born in Waukegan, Illinois to Donald and the late Donna-Marie (McCasland) Wehrenberg.  As the oldest, it was her job to keep her brother, Darren, in line - jokingly speaking, most of the time - and let us never forget the time she filled his front yard with a myriad of hand-drawn Tiggers to mark his momentously growing age.  That is only one example of how her passion for art permeated her life.  Ask anyone amongst family and friends and they will surely share with you what handmade gift was presented to them over the years to mark another Christmas, wedding, or birthday. It was not within the art world that she found her career, however.  Deborah was known for her very first job at Burger King, but better still for the 25 glorious years spent in Community Unit School District 200 in Wheaton, Illinois.  From the Transition Apartments to Hubble Middle School, she opted not to use her teaching degree in favor of remaining an inclusion facilitative aid, primarily in special education classrooms.  It was her belief that she could do good - do best - in those settings.  She fought hard to have an impact on countless students, believing that every child had a right to their education and ensuring not one would be left behind.  That is not to say, though, that art did not follow her around; Deborah spent many years working with Hubble's drama department, drawing program covers and building sets.  Perhaps she was missing her years in that department at both York High School and North Central College. Deborah loved houseplants and sunflower décor.  She never met a dog that she did not like - except that one chihuahua that bit her in the face as a child.  Unfortunately, its name is long forgotten.  She avidly enjoyed solving the murder of the week on Criminal Minds, bragging about her latest Goodwill finds, and watching movies she had forgotten she had seen for a brand-new experience.  It hardly mattered that her family was full of Cubs fans, she adopted her daughter's love of the St. Louis Cardinals.  She loved sharing Wednesday family dinners with her parents and daughter, reading through her library of e-books, and winding down with a hot bath and the perfectly curated soundtrack of classical music, musical theatre, and all things Yanni - oh, and who could forget Prince?  It was Yanni, however, who proved her favorite, bringing us to the cherished moment wherein she and her daughter had the pleasure of meeting him when he surprised a fan group's luncheon prior to his concert.  The only thing that would have been better was the big trip to London she told everyone she was so excited to take before her 60th birthday.  Sadly, it never did come to pass. You see, a leukemia diagnosis was not in any one of those binders, stuffed to the gills with her life's plans and her vacation of a lifetime's itinerary, but that didn't stop Deborah from living the rest of her days with the fire of fight and endless compassion.  She shared belly laughs at infusion centers.  Rest assured, she never lost neither her impressive level of snark nor those stubborn streaks like none you'd seen before.  That is precisely why this drawling obituary is a little less serious than one would expect: she would hate an overly formal, borderline stuffy retelling of selfless acts.  No, she would want a laugh or two, so long as she was not the center of attention.  Too bad her family will not adhere to those wishes when they can safely take that trip to London for her, following every step she planned to walk and making her the very center of their attention as they go. Deborah was preceded in death by her mother, Donna-Marie Wehrenberg.  She is survived by her father, Donald Wehrenberg and her partner of twenty-one years, Scott Luce.  Her favorite and only daughter, Kendall (Jacob) Molina, promises to spend every day hoping to make her proud.  She happily wore the title of Oma to her daughter's dog, Parker, who will miss her and all the toys she gave him.  Left with fond memories, like that time on a road trip in California when she tried to tell their father they had forgotten him in the bathroom a mile back, is her brother, Darren (Denise) Wehrenberg.  She will be missed and remembered by her nieces (and nephews), her grand-nieces, and countless aunts, uncles, and cousins.  Though Deborah lost the battle, she won the war. A small, pandemic-adherent memorial service will be held on Wednesday, August 12th, 2020 from 3 pm - 6 pm with service at 4 pm at Pedersen Ryberg Funeral Home at 435 North York Street in Elmhurst, IL.  Please don't forget your masks when stopping by to say one last "be seeing you" to Deborah. In lieu of flowers, please consider donating to the following causes in Deborah's name: Leukemia & Lymphoma Society Special Olympics Brookfield Zoo

The family of Deborah L. Crader created this Life Tributes page to make it easy to share your memories.

Send flowers to the Crader family.