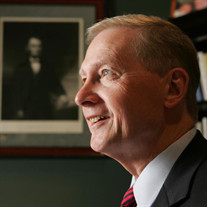 Former Illinois Attorney General Jim Ryan passed away peacefully at home on June 12, 2022, at the age of 76 after several lengthy illnesses. Ryan's considerable accomplishments as a public official and earlier as a Golden Gloves boxing champion were dwarfed by the inspirational power of his perseverance and strength through faith in the midst of a string of devastating personal tragedies and challenges. Ryan endured the death of two of his six children, nearly lost his beloved wife of 54 years to a heart attack, beat back cancer three times, and successfully recovered from heart surgery. Because he was a public figure, most of this pain was shouldered in the public eye, and his grace under duress was an inspiration to thousands of Illinoisans, many of whom he stayed in touch with over the years. Journalists sometimes compared him to the Biblical figure of Job. Through it all, Ryan, a lifelong devout Roman Catholic, leaned hard on his faith and spoke of its power to lift him through it all. He had strong personal relationships with Cardinals Joseph Bernardin and Francis George of the Chicago Archdiocese and other clergy. The other bedrock foundation of his life was his large and lively family, which he rarely was apart from up until his death. He is survived by his high school sweetheart and wife of 54 years, Marie, four children, John (Stacie), Jim (Jennifer), Matthew (Melissa), and Amy. His youngest daughter Anne Marie died at age 12 in 1997 of an undiagnosed brain tumor, and Patrick, 24, died in 2007. He had eleven grandchildren: Caitlyn, Joey, Sarah, Grace, Emma, Stella, Elly, Sophie, Sam, Michael and Molly. When asked about their father, Ryan’s children, John, Jim, Matt, and Amy, commented, “he was a wonderful father and grandfather, who, through example, taught us how to handle life’s greatest joys, and most difficult losses, with dignity and grace. For all that he accomplished during his career, he will be most remembered for the way he lived his life. Family, faith, and service to others defines the remarkable life of our father.” Jim Ryan was best known publicly as Illinois Attorney General from 1995-2003. He was the GOP nominee for Governor in 2002. Ryan became Attorney General after winning the 1994 general election. As Attorney General, he professionalized the office and after a few years was described by a prominent statewide newspaper as the most effective Attorney General in state history. He easily won re-election in 1998 and continued transforming the office to fight violent crime, protect children from abuse, women from domestic violence, and consumers from fraud. "Although it was his life's work, Jim never really felt comfortable in the field of politics," said Stephen Culliton, a former chief judge in DuPage County and a 50-year friend of Ryan's. "He always strived to do the right thing and to help make life a little better for others. And when the inevitable conflicts arose between the politically beneficial thing and the 'right' thing, he always did the right thing. His honesty was a beacon for all of us who worked with him. He will be greatly missed." Another who worked closely with Jim Ryan had similar sentiments. "Jim was too honest and authentic for a career in politics but he was as good a public servant as Illinois has ever known," said John Pearman, a longtime top aide for Ryan in the Attorney General's office. "He never stopped trying to help people -- women, children, crime victims. He was tireless and incorruptible." After he lost the Governor's race, Jim founded The Center for Civic Leadership at Benedictine University in Lisle. He passionately believed that schools needed to do more to engage students in civic life and to engage politically in a civil manner. The Ryans endured their tragedies through their faith and by helping others. The annual Annie Ryan Run in Elmhurst has raised hundreds of thousands of dollars for the Midwest Children’s Brain Tumor Center at Advocate Lutheran General Hospital in Park Ridge. Additionally, for several years, the Ryans hosted the Patrick Ryan Main Event fundraiser featuring amateur boxing. This event raised money to provide assistance to families that have lost loved ones to suicide. Jim was vocal in speaking out publicly on mental illness and Jim and Marie have quietly counseled hundreds of families dealing with cancer and other hardships. Prior to becoming Attorney General, Ryan served 10 years as DuPage County State's Attorney. For eight years prior to that, Ryan was in private practice in DuPage County, after initially serving in the State's Attorney's office as an Assistant State's Attorney and First Assistant State's Attorney. Jim Ryan was born to his parents Edward and Elissa on February 21, 1946, in Chicago. He often said his father was his hero. Edward was an Irish American home builder and Elisa was a homemaker who immigrated from Italy as a child. Jim and his two younger sisters, Maria, and Peggy, grew up in the home their father built in Villa Park. Ryan attended a local Catholic high school, St. Procopius Academy (now Benet Academy). He graduated from Illinois Benedictine College (now Benedictine University) in 1968, where he received a Bachelor of Arts degree in political science. In 1971, he received his law degree from Chicago-Kent College of Law. As a 17-year-old high school student Ryan won the middleweight title in the Chicago Golden Gloves novice division. Ryan was a lifelong boxing fan who shared his passion for the sport with his sons and grandchildren, some of whom won titles of their own. In 2013, with Ryan in his corner, his grandson Joey won the Chicago Golden Gloves. "From the time I met him until his death, Jimmy always was striving to do the right thing and to help people," said his wife Marie. "That was who he was and he was very successful at it." Family and Friends are to Meet at Visitation Catholic Church 779 S. York Road, Elmhurst, IL for a 11:00 a.m. Funeral Mass. Interment Queen of Heaven Cemetery, Hillside, IL

Former Illinois Attorney General Jim Ryan passed away peacefully at home on June 12, 2022, at the age of 76 after several lengthy illnesses. Ryan's considerable accomplishments as a public official and earlier as a Golden Gloves boxing champion... View Obituary & Service Information

The family of Former Illinois Attorney General James E. Ryan created this Life Tributes page to make it easy to share your memories.

Send flowers to the Ryan family.