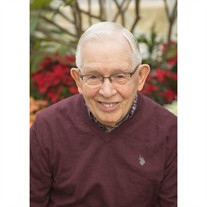 John M. Finstrom was born on October 17, 1932, in Chicago, IL, to parents John and Elin FInstrom.  Known as Milt during his younger years, he was doted on by his 3 older sisters, Edith, Ruth and Gladys. John graduated from Austin High School in Chicago, IL, in 1949.  After high school, he started in the stockroom at Union Special Corporation in Chicago.  In 1951, he became a Tool and Die Maker apprentice.  In 1952, John was drafted into the US Army.  He spent most of his time in the military in Austria as a sergeant communications chief.  He completed his service in November 1954.  After attending Purdue University, John returned to Union Special Corp. and became a Tool and Die Maker Journeyman.  He remained with Union Special in various management capacities until his retirement in October of 1996. In 1960, John met Evelyn Orth at Central Avenue Baptist Church in Chicago, IL, where he had attended since birth.  John and the new church secretary hit it off and were married in July 1961, eight months after they met. God richly blessed John and Evelyn with 59 years of marriage and two wonderful daughters.  They lived in Oak Park, IL, until 1976, when they moved to Villa Park, IL, and attended First Baptist Church (now Cityview Community Church) in Elmhurst, IL.  John was very involved in the church helping in many various and diverse roles such as Chairman of the Deacon Board, overseeing the maintenance of the building and grounds and volunteering with the weekly boys program, Christian Service Brigade. He assisted in several extensive renovation projects at the church and was always willing to lend a hand where he could. In 2018, John and Evelyn moved to the Oak Trace retirement community in Downers Grove, IL. They enjoyed their time together here, making new friends and reacquainting with old ones. John is survived by his wife Evelyn, daughters Diane (Steve) Knopp and Denise Finstrom, and grandsons Jonathan Knopp and David Knopp.  John was preceded in death by his parents, siblings Edith (Joe) Moore, Ruth (Gary) Blomgren, and Gladys (Frank) Fitch. A memorial service will be held at Cityview Community Church, 343 S York, Elmhurst, IL, on Thursday, February 4th, at 2:00pm.  The family and church request that you follow the COVID-19 prevention guidelines of wearing masks at all times inside, social distancing, practice good personal hygiene (hand sanitizer provided), and also request that you stay home and view the livestream if you have any symptoms or have been exposed to COVID-19. Memorial gifts can be sent to Caring Network, caringnetwork.com, or Mission Eurasia, mismioneurasia.org. Please follow this link to view the livestream of the service:   John M. Finstrom Memorial Service

John M. Finstrom was born on October 17, 1932, in Chicago, IL, to parents John and Elin FInstrom.  Known as Milt during his younger years, he was doted on by his 3 older sisters, Edith, Ruth and Gladys. John graduated from Austin High School... View Obituary & Service Information

The family of John M. Finstrom created this Life Tributes page to make it easy to share your memories.

Send flowers to the Finstrom family.