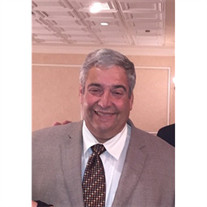 Joseph James Cerrone, 63, of Elmhurst, IL passed away of a sudden heart attack on Friday, July 7th, 2017. Joe - known affectionately by his loved ones as JoJo - was a lifelong Chicagoan, born at Rush Presbyterian in 1954. He grew up in Melrose Park and attended Jane Addams Elementary and Proviso East High School, where he formed lifelong close friendships with his classmates. He graduated from the University of Iowa - where he claims to have majored in Ping Pong and Golf - and was fortunate enough to see both his son and daughter become fellow alumni. Joe married Sandra Lee Larsen on February 14th, 1981, and together they had two children, Erica and Joe.Joe was known for his outstanding sense of humor, boisterousness and consummate friendliness. He was a loving son, brother and father, and a lifelong reliable friend. Anyone who met him would be instantly warmed by his enthusiasm and infectious personality.Outside of his love for his friends and family, Joe's passion in life was golf. An avid golfer with a mean short game, Joe took to the links most weekends, sharing great stories (and many bad jokes) with his friends, his father and his son. Joe had a gift for technology and engineering. He had a long career as a supervisor in various areas of manufacturing and technical maintenance. Most notably, he spent about 20 years at Northrop Grumman, where he oversaw clean room operations and other manufacturing processes associated with defense systems for aircraft. In his most recent position at United Electronics Group, he managed a group of technicians who repaired various tablet and cell phone devices. He was a tinkerer of all kinds of electronic gadgets, always ready to assist friends and family with computer care. Joe was a dedicated sports fan, cheering on his alma mater, the Iowa Hawkeyes, through good and bad times. He was also an enduring fan of the hometown White Sox, Bulls, Bears and Blackhawks. He likewise would let it be known, to anyone who would listen, of his rooting interest for whomever was playing against Notre Dame.Beloved Husband of Sandra, nee Larsen; Loving Father of Erica (Paul) Sutton and Joseph Cerrone; Devoted Son of Anna Opal Cerrone and Joseph Timothy Cerrone; Dear Brother of Alberta Cerrone Mytys; Fond Uncle of many nieces and nephews. Visitation at the Pedersen Ryberg Mortuary, 435 N. York St., Elmhurst on Thursday, July 13, 2017 from 4 to 9 p.m. and where Funeral Services will be held on Friday, July 14, 2017 at 11 a.m. In lieu of flowers, please consider a donation to the American Heart Association (heart.org) For more information 630-834-1133 or pedersenryberg.com

Joseph James Cerrone, 63, of Elmhurst, IL passed away of a sudden heart attack on Friday, July 7th, 2017. Joe - known affectionately by his loved ones as JoJo - was a lifelong Chicagoan, born at Rush Presbyterian in 1954. He grew up in Melrose... View Obituary & Service Information

The family of Joseph James Cerrone created this Life Tributes page to make it easy to share your memories.

Joseph James Cerrone, 63, of Elmhurst, IL passed away of a sudden...

Send flowers to the Cerrone family.