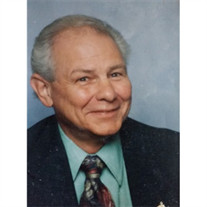 Joseph Anthony Sica, age 77, passed away September 10, 2017. Joseph Anthony Sica may have lost his battle with cancer at his home on September 10, 2017, but he would not allow it to rob him of celebrating his 50th wedding anniversary one day earlier with his lovely wife, Marie. As a real estate broker the majority of his life, Joe worked hard to take care of his family needs. So fighting cancer's chance of taking away his special day with his wife was just one of those things he just did. Joe was a caring man who always looked to help others in their time of need, even if it meant putting off things for himself. From helping family members with real estate services to helping his not so handy son-in-law with home repairs. He always freely gave of himself to family and friends. Family meant everything to Joe, no matter what was going on around him. For family birthdays Joe loved to provide the gift of entertainment as he revealed in playing uplifting songs on his accordion to liven up the party. For his own birthday Joe would want the simple things back, like a shirt with a pocket. It definitely had to have a pocket. Joe is survived by his wife, Marie, his daughter, Lynn, who is married to his son-in-law, Tim, his son, Tony, who is married to his daughter-in-law, Jeaneen, and his 5 loving grandkids: Evan(13), Eddy(10), Aiden (9), Joey (7) and Samantha (6). In addition, many nieces, nephews and extended family will miss their uncle or cousin. Joe was a loving husband, father, grandfather and friend to all who were lucky enough to come in contact with him. Visitation at the Pedersen Ryberg Mortuary, 435 N. York St., Elmhurst on Wednesday, September 13, 2017 from 4 to 8 p.m. Family and friends will meet at St. Charles Borromeo Catholic Church, 145 E. Grand Avenue, Bensenville, IL for a Funeral Mass 10:00 a.m. Entombment Christ the King Garden Mausoleum Queen of Heaven Catholic Cemetery, Hillside, IL. For info 630-834-1133

The family of Joseph A. Sica created this Life Tributes page to make it easy to share your memories.

Send flowers to the Sica family.