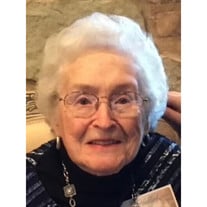 Lola Clark French, 98, died peacefully on March 17, 2021, at the Michealsen Health Center of The Holmstad in Batavia, Illinois. Lola was born on February 13, 1923, in Mt. Sterling, Illinois, to James R. and Laura Clemons Clark. The fourth of seven children, she grew up in a loving family that valued education and was well respected in their community. After graduating from Mt. Sterling High School, Lola attended the University of Illinois. She graduated in 1945 with a degree in journalism and began writing for the Moline Daily Dispatch.  Her career was temporarily put on hold in November 1948 when she married Stephen F. French, Jr., with whom she raised six children. Lola began working again in the late 1960s. Her employers included Elmhurst Memorial Hospital, the Elmhurst Press, and Elmhurst Public Schools. She retired from Elmhurst College as the Editor and Director of Communications in 1986. Lola's devotion extended not only to her family and career, but also to Yorkfield Presbyterian Church, Laubach Literacy, the Elmhurst Art Museum, and the Elmhurst Historical Museum. A lifelong learner, she traveled and studied both internationally and close to home. Lola is survived by her children Douglas (Kay), Stephen III, Laura Ryan (T. Bernard), Richard (Debra), and Kenneth (Laurel), 14 grandchildren, and 9 great grandchildren. Additional survivors include brothers J. Rolland Clark, Donald Clark (Carol), and George Clark, numerous nieces, nephews, and their children and grandchildren. She had been especially well loved and cared for by her niece Beverly Thomas (Larry). She was preceded in death by her husband, her daughter Emily Jane, her parents, her brother Clemons "Bud" Clark, and her sisters Virginia White and Ruth Peacock. A celebration of life at Yorkfield Presbyterian Church in Elmhurst is planned for Saturday, May 14, 2022, at 1:30 pm. Burial was at the Abraham Lincoln National Cemetery in Elwood IL . In lieu of flowers, please consider a donation to any of following: Brown County- IL Historical Society, The Holmstad Benevolence Fund, or Yorkfield Presbyterian Church.

Lola Clark French, 98, died peacefully on March 17, 2021, at the Michealsen Health Center of The Holmstad in Batavia, Illinois. Lola was born on February 13, 1923, in Mt. Sterling, Illinois, to James R. and Laura Clemons Clark. The fourth of... View Obituary & Service Information

The family of Lola Clark French created this Life Tributes page to make it easy to share your memories.

Send flowers to the French family.