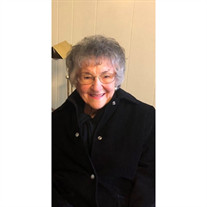 May Corbo (nee Maffia), of Bensenville, IL. Beloved Wife of 52 years to the late Steve A. Corbo (2004); Loving Mother of Stephen (Maria) Corbo and Kathleen (Tom Culleeney) Corbo; Proud Grandmother of Alexander (fiancée Kaylee Greenberg) Corbo; Devoted Daughter to the late Anthony and Mabel Maffia; Dear Sister of the late Mary (the late George) Albert, the late Ella (the late Roy) Johnsen, the late Anthony (the late Bernice) Maffia, the late Anna (the late Sam) Pacenti, the late Lawrence (the late Marie, and companion to the late Iola Nesti) Maffia and the late Carl (survived by Dorothy) Maffia; Fond Sister-in-Law of the late Anthony (the late Margaret) Corbo, Mary (the late Robert, and companion to the late Gino Mazzuchi) Blazek and the late Annette (survived by Jack) Colombo. In addition May is survived by many nieces, nephews, godchildren and friends, all of whom she loved. May was a proud graduate of  National College of Education.  She taught in the Chicago Public School System and substitute taught in Du Page County. Also, May worked together with her husband in his business for  30 years.  She enjoyed life to the fullest and was never more happy than when surrounded by her loving family and friends.  Visitation at the Pedersen Ryberg Funeral Home, 435 N. York St., Elmhurst on Sunday, January 30, 2022 from 1:00 p.m. to 7:00 p.m.  Funeral Monday, January 31, 2022  beginning with prayers at the funeral home at 9:00 a.m. and proceeding to St. Charles Borromeo Catholic Church, Bensenville, Funeral Mass 10:00 a.m.  Entombment Christ the King Garden Mausoleum, Queen of Heaven Cemetery.  For info 630-834-1133 or pedersenryberg.com

The family of May Corbo created this Life Tributes page to make it easy to share your memories.

Send flowers to the Corbo family.