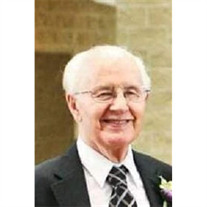 Michael Joseph Horvath, age 86, devoted husband, father and grandpa to his family, and loved dearly, entered into the presence of his Heavenly Father on April 7, 2018. He was born on April 25, 1931 in Chicago, IL to Caroline Stanko, a polish immigrant and survivor of the Titanic, rescued and taken to Ellis Island where she met Michael's father, an immigrant of Hungary, they married and settled down and raised Michael and his siblings in Chicago. He is survived by his wife, Miriam (Jacobus) Horvath of 64 years, his loving daughters, Linda (Patrick) Carmody of Oswego, IL and Nancy (Jay) Webb of Elmhurst, IL. his seven grandchildren, Patrick, Jr. (Jennifer) Carmody of Lake Wylie, S.C., Kelley (Ron) Hadireza of Rancho Santa Margarita, CA, Ryan (Jenna) Carmody of Sugar Grove, IL, Kyle (Jacqueline) Carmody of St. Charles, IL, Erik (Brittany) Webb of Berrien Springs, Michigan, Timothy (Marilyn) Carmody of Oswego, IL and Brian Webb (Emily Banza) of Villa Park, IL along with 15 great grandchildren, a sister, Mary Powers, sister in-laws; Irene Horvath, Nancy Jacobus, Pearl Horvath and many nieces and nephews. He was preceded in death by his parents, brothers; Martin, Steven, John, Joseph, Frank, and twin brother, Anthony, sisters Ann and Sophie Hanson, brother in-laws; William Jacobus, Donald Jobb, Chester Powers and Fritz Hanson, sister-in laws; Sharon Jobb, Ann Horvath and Mary Horvath. Michael started working at Soo-Line Railroad when he was 17 years old and retired in 1993. He had many fond memories of the days and fellow workers at Soo Line where his brother Steven also was employed. Michael and Miriam bought a home in Elmhurst in July of 1960 where they still resided when Michael went to be with the Lord, 58 years in July of this year. Michael loved to fish and work on projects in his workshop where he and Miriam put together many projects for their home or their loved ones. Michael would do the wood cutting and Miriam did the painting and art work. He also did small furniture projects building or refinishing. They never wanted it to become a business where they felt it would lose it's meaning to them as projects of love. He also liked to watch the Cubs and the Bears and like many fans wished for those years that they might come out on top and sure enough he got to see the Cubs finally win the World Series! Michael loved the Lord. He spent many hours being a trustee and helping out with various jobs at the church they belonged to, helping Miriam with Sunday School for the little ones or being an Awana leader and the "door keeper and greeter for the Tuesday night Ladie's bible study. He would want you to know that he served his loving Father, Creator and Savior. Him and Miriam were longtime members of West Suburban Church with many friends over the years from West Suburban and Addison Bible that they could call their family. Michael was a man of integrity, kindness and strength. We will all dearly miss him but look forward to being reunited with him in the presence of our Savior. We want to thank the people at Alden of Waterford, the medical staff at Copley and Elmhurst Hospital and Bridgeway for their dedication and care of Michael in these last months. And a special thank you to the family's dear friend, Lauri Carr, for the weeks she spent taking care of him at Alden.

Michael Joseph Horvath, age 86, devoted husband, father and grandpa to his family, and loved dearly, entered into the presence of his Heavenly Father on April 7, 2018. He was born on April 25, 1931 in Chicago, IL to Caroline Stanko, a polish... View Obituary & Service Information

The family of Michael Joseph Horvath created this Life Tributes page to make it easy to share your memories.

Send flowers to the Horvath family.