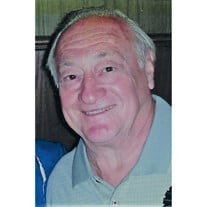 Michael J. Terrafino, 85, passed away Thursday, December 10, 2020. He was born July 22, 1935 in Chicago, Illinois to Vito and Maddelina (nee Innamorata) Terrafino. Michael was an Elmhurst resident for 47 years. He was a selfless hardworking man that put his family before himself; he would give you the shirt off his back. Michael was a wonderful provider, a good neighbor, had the gift of giving, and always came to the rescue. He was persistent, gracious, ambitious, helpful and humble. He was an avid photographer who took thousands of pictures of his family, mostly of his grandchildren. While his love for his family was unwavering, Michael had a passion for cars that started as a young boy and became his lifetime career as an impressive stockcar builder and driver with notable achievements. He was inducted into the Illinois Stockcar Hall of Fame in 2016. As a car driver and car owner, he raced at O'Hare Stadium, Soldier Field, and Rockford Speedway and Milwaukee Mile. In the 1950's and 1960's, Michael owned and operated an auto shop.  Then, in 1965 he went to work for Nickey Chevrolet in Chicago.  While at Nickey he was the first to put a 427 into a Camaro.  It came to be known as the (Nickey Camaro) which was featured in the Hot Rod Magazine and several publications since. His hard work inspired his sons to excel in mechanical related careers.  Michael later worked for State Farm Insurance for 31 years as a claims adjustor and finished his career as a fraud investigator.  He was also a volunteer fireman in Elmhurst with the former Yorkfield Fire Department for about 10 years. A neighbor that Michael recruited to be a volunteer fireman was also inspired by his hard work and ended up becoming a full-time fireman who advanced to lieutenant for the Naperville fire department. Michael is survived by his loving wife of 64 years, Joanne (nee Ryfeldt) Terrafino; his children Michael J. (Deanna) Terrafino, James (Bonnie Evans) Terrafino, Dave Terrafino, Diane (Mike) Karpman, and Kathryn J. (Dan) Radojkovic; his grandchildren Angela Terrafino, Amanda (Donald Hurst) Terrafino, Michael R. Terrafino, James Terrafino Jr., Michael D. Karpman, Garrett Karpman, Quentin C. Karpman, and Ella Radojkovic; his sister Janet Gagliano; and several nieces and nephews.  He is preceded in death by his parents and his siblings Joseph (Paula) Terrafino and Rose (Chuck) Mayne. Services and interment for Michael were private.  A "Celebration of Life" is being arranged in the near future but no date or place has been set.  We encourage you to sign the guest book and please post pictures of Michael

Michael J. Terrafino, 85, passed away Thursday, December 10, 2020. He was born July 22, 1935 in Chicago, Illinois to Vito and Maddelina (nee Innamorata) Terrafino. Michael was an Elmhurst resident for 47 years. He was a selfless hardworking... View Obituary & Service Information

The family of Michael J. Terrafino created this Life Tributes page to make it easy to share your memories.

Send flowers to the Terrafino family.