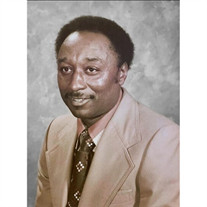 Ocie Fred Thompson was born on October 15, 1935 in Mason, Tennessee to the parents of Richmond and Louise (Coleman) Thompson.  He was the third child out of four. Ocie attended both grammar and high school in Memphis, Tennessee. Ocie enlisted in the air force in 1953 and was based in Glendale, Arizona.  He spent three years in active duty for the airforce, and did 21 years in the reserves.  During this time is when he met his wife, Ruth, in Phoenix, Az.  They were married in 1956 and moved to Memphis shortly after they married. In 1957 Ocie and Ruth moved to Chicago, IL  with their infant son, Victor,  The young couple was looking to better their lives in Chicago since work was not readily available in Memphis. Ocie went to work for the United States Post Office in Chicago, in 1958.  He worked there for 38 years.  In 1974, he joined the United States Army Reserves.   In 1983, Ocie also went to work for the sheriff's department, and would work there for 20 years, retiring in 2003. Ocie obeyed the gospel of Christ on October 12, 2002, and was added to the church.  He remained a member of the Church of Christ for the rest of his days. Ocie was one who took pride in all he did. Whether it was getting groomed and dressed to look his best or sitting down to savor a good meal, Ocie was going to make sure to take his time and do it his way.  He wasn't going to be rushed, he was going to make sure he was getting the most out of every experience One of Ocies greatest attributes was the love he had for his friends and family.  He went to great lengths to keep in contact with those that were near and dear to him. He didn't hesitate to pick up the phone to call a family member, or invite someone over to visit.  He cared deeply for the people in his life. Ocie finished this life's journey on January 20, 2022 He was preceded in death by his wife, Ruth, his son, Victor, and both of his sisters. He is survived by his brother Richmond,  sons Vincent (Linda) Thompson, Vandon (Tina) Thompson, grandsons Marquis (Joy) Garrette and Jaylon Thompson, a granddaughter Vineese Thompson and four great grandchildren; Ramiro, Anastasia, Miles and Monroe Visitation Friday Feb 11, 2022 from 3:00 p.m. until 8:00 p.m. at Pedersen Ryberg Funeral Home 435 N. York Street, Elmhurst, Il  and  Saturday Feb 12, 2022  from 10:00 a.m. until service time 11:00 a.m. . Interment Fairview Memorial Park Cemetery, Northlake, IL For info 630-834-1133

Ocie Fred Thompson was born on October 15, 1935 in Mason, Tennessee to the parents of Richmond and Louise (Coleman) Thompson.  He was the third child out of four. Ocie attended both grammar and high school in Memphis, Tennessee. Ocie enlisted... View Obituary & Service Information

The family of Ocie Fred Thompson created this Life Tributes page to make it easy to share your memories.

Send flowers to the Thompson family.