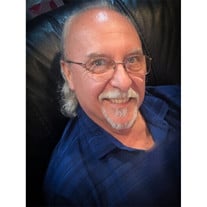 It is with deep sadness that we announce the passing of cherished husband and devoted father and Papa, Paul H. Oscar suddenly yet peacefully at the age of 66 on December 14th, 2021, surrounded by his family. Paul met and couldn't help falling in love with his "meant to be" of 43 years, Nancy (nee Pingel). Their shared admiration for each other will be thoroughly missed. Paul is also survived by his 3 beautiful children Brent (Elizabeth) Oscar, Derek (Jennifer) Oscar, Jessica (Sergio) Rascon and his treasured grandchildren Preston & Christian Oscar and Joel & Audrey Rascon. Paul was born to the late Helen and John Oscar Sr. in Elmwood Park, Il. along with his brother the late John Oscar Jr. (Willie Jo), and sisters Dolores (the late Leonard Budney) & (the late Donald Troyer), and Patricia Mascari. As an avid fish aficionado, basement drum rock star and golf fanatic Paul surrounded himself with hobbies that simply made him happy. Paul's life experience can be accurately depicted in his extensive photo collection and recent albums are consumed with the many wonderful memories he shared with his four grandchildren. Paul always had insightful wisdom, a joke, and a free hand to pet his grand pups JD, Scratch, Bruin, and Larry. He spent his life career coaching others after receiving his Master's Degree from DePaul University in 2005 and used his education in his various management positions to inspire others with his passion for lifelong learning. Paul found a particular love for his most recent job with The UPS Store as an Area Development Manager, and his many colleagues will tell of his incredible work ethic, natural ability, and just all-around genuineness.Paul will be greeted in heaven by his father-in-law the late Preston Pingel and greatly missed by his mother-in-law Dorothy Pingel, sister in-law Sandra Pingel, brother's in-law Paul Pingel (Kristen Koby), David Pingel (Shirley) & sister in-law Lisa Pingel, as well as many aunts, uncles, cousins, nieces and nephews and their children, and lifelong high school friends.A memorial and celebration honoring Paul's profound life will be determined and communicated at a later date.  In lieu of flowers, a donation to St. Jude's Children's Research Hospital, Ronald McDonald House Charities or a charity of your choice would be greatly appreciated along with your thoughts and prayers.

It is with deep sadness that we announce the passing of cherished husband and devoted father and Papa, Paul H. Oscar suddenly yet peacefully at the age of 66 on December 14th, 2021, surrounded by his family. Paul met and couldn't help falling... View Obituary & Service Information

The family of Paul Henry Oscar created this Life Tributes page to make it easy to share your memories.

It is with deep sadness that we announce the passing of cherished...

Send flowers to the Oscar family.