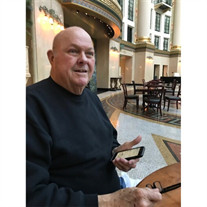 Ralph John OConnell, unforgettable storyteller and generous heart, joined his beloved wife Dolores (nee Rosenwinkel) in heaven early Sunday, July 12.  His twinkling eye and zest for life will be missed by all lucky enough to call him friend and family. He began his career with the Elmhurst Police Department in 1962, moving from street patrol to investigations, and ultimately retiring as Deputy Chief in 1998.  He embodied the motto, "To serve and protect", leading the Elmhurst Police Explorer Program for many years as well as serving on the Police Pension Board. His sense of duty was matched by his sense of humor.  Ralph's leprechaun costume, old-school police or ghost stories and a love for practical jokes remain legendary.  He loved playing a mediocre round of golf, the warmth of a smooth scotch, time spent on or around the lake, and being surrounded by friends and family. Ralph stood apart both for his stature and heart.  If he was around, you knew it.  He would give you the shirt off his back, even with its every-present food or blood stain.  He lived life on his own terms until the end, never allowing his medical battles to define him. Ralph is survived by his loving wife Margaret "Peggy" (nee Yeager/Ruth); son Kevin (Katie); daughter Maggie; granddaughters Ella and Mary; siblings William, Raymond, and Kavita.  He is also survived by his expanded family with Peggy: step-children Rita (Dan) White, Kathy (Ken) Rutkowski, John (Karen) Ruth, and Sue (Jim) Hoerster; and grandchildren Megan, Abby, Caroline, Zack, Jake, Kate, Molly, Anna, and Cece.  He was an uncle to many and a friend to all.  He is preceded in death by his parents Ralph and Mary, and his sister Mary Pat. Ralph loved his role as husband, father, and grandfather.  All will miss his ceaseless requests to pull his finger. Due to safety concerns, services will be private.  In lieu of flowers, donations may be made to the Elmhurst-Yorkfield Food Pantry, 1083 S. York Rd., Elmhurst, IL 60126.

The family of Ralph J. OConnell created this Life Tributes page to make it easy to share your memories.

Send flowers to the OConnell family.