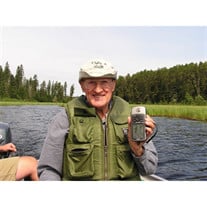 Richard J. Cichy was born on September 17, 1934 in Chicago, Illinois to John and Mary (nee Neuzil) Cichy. He passed away Tuesday, April 2, 2019 in Elmhurst, Illinois. Richard was an avid member of Faith Evangelical United Methodist Church in Elmhurst. He loved the outdoors, enjoyed fishing, and proudly served in the United States Army. Richard is survived by his wife Nancy (nee Wright); his children Jeanene (Ed) Schwarz, Donna (William) Hamilton, and Brien Cichy; his grandchildren Benjamin and Alexie Schwarz, and Ryan and Kelly Hamilton; his siblings Rita (the late Walter) Stryszyk, Carol (the late Norbert) Wojtecki, and Betty (Andrew) Bellavia; also by many nieces and nephews. He is preceded in death by his parents and his siblings Elayne (the late John) Guck, and Emilie Carlon. Visitation will be on Saturday, April 6, 2019 from 9:00 am until time of Funeral Service at 12:00 pm. Private Interment. In lieu of flowers, memorial contributions may be made to the American Parkinson Disease Association, 135 Parkinson Avenue, Staten Island, NY 10305, or to the American Lung Association, National Direct Response Headquarters, 1200 Hosford Street, Suite 101, Hudson, WI 54016.

The family of Richard J. Cichy created this Life Tributes page to make it easy to share your memories.

Send flowers to the Cichy family.