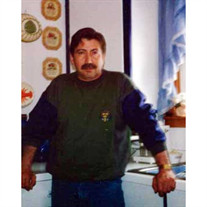 Richard Rey Storey, "Rick", 67, of Melrose Park, IL, passed away peacefully on Saturday, October 15, 2016 at Elmhurst Memorial Hospital. Born in Belen, New Mexico to David and Ninfa Storey, he lived most of his life in Melrose Park, IL.Richard was an extremely hard working man who was a self-employed contractor. Richard was also a proud veteran who served in the Vietnam War. He was the Post Commander of the Tioga VFW POST 2149 in Wood Dale, IL. Richard was rewarded for his commitment to Veterans helping Veterans.Richard was a loving husband as well as a proud father, grandfather, and great-grandfather. Hs is survived by his wife and best friend, Glenda (Caldwell) Storey and his three daughters, Lisa (Jeff) Cook, Angela (Duane) Cook and Melissa (Vincent) Azzaretto. He is also survived by his grandson, Randall, granddaughter, Jessica, granddaughter Elysa, granddaughter Alexis, grandson Mitchell, granddaughter Gianna, grandson Joseph, granddaughter Mia, granddaughter Nicole, grandson Vincent, granddaughter Luciana, great granddaughter Layla, great granddaughter Isabella, his mother Ninfa, brother James and his sister Eileen, as well as his many loving aunts, uncles, nieces, nephews and other friends. He is preceded in death by his granddaughter Lauren and his father David. Visitation will be held at the Pedersen Ryberg Mortuary, 435 N. York St., Elmhurst on Friday, Oct. 21, 2016 from 3 to 9 p.m. and where funeral services will be held on Saturday, October 22, 2016 at 10 a.m. Interment with Military Funeral Honors will follow at Elm Lawn Cemetery, Elmhurst, IL

The family of Richard Rey Storey created this Life Tributes page to make it easy to share your memories.

Send flowers to the Storey family.