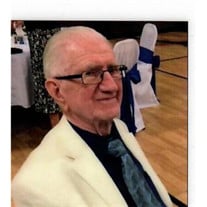 Robert John Miller, 92, of Lombard, IL and formerly of Elmhurst, IL, passed away peacefully on Saturday, October 17, 2020, at Elmhurst Hospital. He was born the youngest of four children on September 9, 1928, in Chicago, IL to Henry and Vivienne (Jones) Miller.  Robert married Virgie Bonfiglio in Westwego, LA, on April 10, 1948; they celebrated 65 years of marriage before her passing in January of 2014. Robert spent his youth growing up "in the country" of Mississippi getting into every kind of mischief that only this good ol' country boy could. In his teens his family moved to New Orleans. He was a very social ants -in-the-pants kind of guy who loved New Orleans and all the good food, activities and most of all his dear sister and brother-in -law, Gussie and Pete Hart, who preceded him.  He enjoyed fishing the Gulf of Mexico and enjoyed his trips to the fish camp with his brothers-in-law Junior Hockgraver and Jay Meadows and sisters-in-law Rose and Lena. He learned to be a Linotype operator and became a printer for life. It was that career that led him to the Windy City of Chicago to be met with 27" of snow his first year living there. His printing career continued for many years and he taught Linotype at the Union Shop on Saturdays. He loved his grandsons, Jason & Jeremy Hastings and Kyle and Steven Miller: Nothing like a summertime week at Paw Paw's house, a walk to Dunkin' Donuts and playing at the park. They always looked forward to that week of being spoiled!  And, of course, watching their beloved Cubbies! Robert is survived by his loving daughter, Kathleen (Jeffrey) Hastings of Portage, IN and a son Michael (Cindy) Miller of Appleton, WI and grandchildren Jason (Ronda) Hastings and their children Hunter, Trevor and Adriana Hastings; Jeremy (Rebecca) Hastings; Kyle (Nikki Colburn) Miller and their daughter Ruby; and Steven Miller and his children Ava, Ethan and Burke; sisters-in-law Lena Meadows, Rose Hockgraver, and Nancy Bonfiglio; and numerous nieces and nephews. Robert is further survived by very special friends Marion Pearson and Lorenzo Huamanchumo. We would like to give an especially heartfelt thank you to Robert's long-time doctor, Dr. Ronald Cheff and his staff; and, to the wonderful staff of Lexington Square in Lombard. There will be a short visitation on Friday, October 23, 2020, at Pedersen-Ryberg Funeral Home, 435 North York, Elmhurst, IL from 10 a.m. until noon. There will be a blessing provided by Deacon Tom Nolan and Mimi Nolan at the service.  Masks are required along with social distancing.  There will be a procession to Mary Queen of Heaven Cemetery where he will be laid to rest beside his wife, Virgie.

Robert John Miller, 92, of Lombard, IL and formerly of Elmhurst, IL, passed away peacefully on Saturday, October 17, 2020, at Elmhurst Hospital. He was born the youngest of four children on September 9, 1928, in Chicago, IL to Henry and Vivienne... View Obituary & Service Information

The family of Robert John Miller created this Life Tributes page to make it easy to share your memories.

Robert John Miller, 92, of Lombard, IL and formerly of Elmhurst,...

Send flowers to the Miller family.