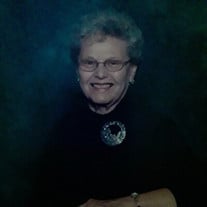 Solveig Bernice Pedersen (Syverud), of Elmhurst, IL, passed away Monday, January 03, 2022, at Elmhurst Hospital, at the age of 101. She was born October 25, 1920, in Kenosha, WI and raised in Winthrop Harbor, IL; a daughter of the late Hans and Signe Syverud, who were immigrants from Norway. Solveig was preceded in death by her beloved husband of 45 years, Robert "Bob" Pedersen and sister, Shirley McKee. She is survived by her two daughters, Joanne and Linda; five grandchildren, Kevin(Megan), Dee Dee(Eric), Tim, Robin(Jaime), and Suzy(Daniel); twelve great-grandchildren; and her sister, Evelyn Holmberg. She also leaves behind to cherish her memory many other family members and countless friends, who will sadly miss her. Post high school she attended the Swedish Covenant Hospital School of Nursing to pursue a career in nursing. Just like many of the Greatest Generation, she decided to use her training and enlisted in the United States Army. During World War II she served in the Army Nurse Corps on the US Army Ship Algonquin from 1943-1945, which was stationed in the Mediterranean. Her nickname was "Syv", and she was a recipient of the American Campaign and World War II Victory Medals. Solveig even met the Pope during her time serving! Upon her return from Europe she worked as a plant nurse for the Johnson Motor Company in Waukegan, IL. In 1951, Solveig met her future husband and love of her life, Bob, on a bus tour in Norway, while visiting their respective families. Their romance almost never blossomed when the ship that Solveig and her mother were sailing home on had no more available seats for Bob. Luckily, a man had to give up his seat after breaking his leg . . . details of how this happened are fuzzy. Upon returning to the states, Solveig and Bob were married and resided in Broadview,IL and subsequently, Elmhurst, IL where they would live and raise their family for the rest of their days. Their time was filled with loving neighbors, friends, family, church, and being part of the Elmhurst community. They were members of Yorkfield Presbyerian for their worship. Outside of being a veteran, nurse, homemaker, wife, mother, grandmother, great-grandmother, and aunt, Solveig loved humor, Jimmy Stewart, reading, Norwegian sweaters, the Cubs (who won one World Series in her 101 years), broccoli cheese soup, Wheel of Fortune, bird watching, writing and receiving letters, Hershey Kisses, Willerup Bible Camp, and just being an amazing person and friend to all she met. Solveig will be buried on January 15th at Mount Emblem Cemetery in her final resting place with her beloved husband, Bob. Unfortunately, due to Covid precautions Solveig's funeral will be immediate family only at Pedersen Ryberg Funeral Home. In lieu of flowers, we request any donations in her honor be made to Willerup Bible Camp, a Veterans organization of your choice, or your local animal shelter. We know how much she was loved, so a Celebration of Life event will be planned for the summer when the weather is better and hopefully covid restrictions are lessened, with dates to be determined. Solveig would often tell us "this too shall pass" when in hard times, and we know that message still stays true.

Solveig Bernice Pedersen (Syverud), of Elmhurst, IL, passed away Monday, January 03, 2022, at Elmhurst Hospital, at the age of 101. She was born October 25, 1920, in Kenosha, WI and raised in Winthrop Harbor, IL; a daughter of the late Hans... View Obituary & Service Information

The family of Solveig Pedersen created this Life Tributes page to make it easy to share your memories.

Send flowers to the Pedersen family.