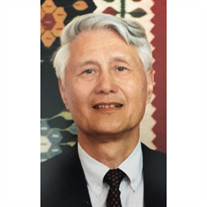 William Tseng-Lu Sha passed away on 10/7/20 at the age of 92 with Joanne his wife of 63 years at his side.  He led a remarkable life across 2 continents.  He was born in Haimen, China to landowners (Ching Fung and Yunei Gee Sha) along the Yangtze River.  In 1945 their land was taken by the predecessors of the Communist Party.  He entered Jiao Tong University in Shanghai and studied maritime administration but was unable to complete his studies due to the Communist occupation of Shanghai.  Through an apprentice program with his University he worked for the China Merchants Steam Navigation Company as a ship navigator.  Due to the political instability in China, his merchant ship was based in Taiwan.  For 3 years he sailed around Asia with periodic stops back in Taiwan where his family had relocated.  In May 1953 his ship was sent to America.  After stops in Los Angeles and New Orleans, his ship arrived in New York City where he and several of his classmates walked off the boat for a better life. He worked as a dishwasher before completing a Draftsman Certification at the Mondell Institute and eventually worked for Foster Wheeler where Chinese co-workers introduced him to his wife Joanne.  He attended night school at the Polytechnic Institute of Brooklyn, receiving his BS (1958) in Mechanical Engineering.  Because of the 1948 Displaced Persons Act which helped Chinese immigrants remain in America, he was able to avoid returning to Communist China.  In 1960 he received his MS in Mechanical Engineering from Columbia University and joined the Atomic Power Department of Westinghouse.  Westinghouse sponsored a scholarship that allowed him to return to Columbia University to complete his PhD thesis, entitled "Neutron beam attenuation as an out of pile void determination technique and new concept of shim control for pressurized water reactor."  He received his PhD in Nuclear Engineering (1964).  In 1967 he left Westinghouse to join Argonne National Laboratory where as a senior scientist he led the Analytic Thermal Hydraulic Research Program and the Multiphase Flow Research Institute for many years.  He pioneered computational methods in multiphase flow critical for the safe operation of nuclear reactors.  Over his career, he published more than 290 papers and received 2 patents in the field of thermal hydraulics.  The American Nuclear Society awarded him the 2005 Technical Achievement Award from the Thermal Hydraulic Division, the 2006 Glenn T. Seaborg Medal, the 2007 Samuel Untemyer II Medal, and the 2008 Reactor Technology Award.  His work took him around the world where he presented his work and collaborated with other scientists.  He was a strong believer in hard work and the importance of education, traits that he attributed to his mother.  Well into retirement he published his first book through Cambridge University Press, Novel Porous Media Formulation for Multiphase Flow Conservation Equations (2011).  He lived the American dream, achieved scientific success, and was always proud of his wife, children, and grandchildren. He is survived by his wife, Joanne; his 3 children Andrea (Greg) Hunt, Beverly (Tom Liao), and Bill (Shawna Suzuki); and his 3 grandchildren (Grace, Sam, and Walter).  Services will be privately held on 10/17/20 at Concordia Cemetery. Donations in lieu of flowers can be made to the American Nuclear Society http://ans.org/donate/sha or to Columbia University (Trustees of Columbia University) https://engineering.givenow.columbia.edu/#

William Tseng-Lu Sha passed away on 10/7/20 at the age of 92 with Joanne his wife of 63 years at his side.  He led a remarkable life across 2 continents.  He was born in Haimen, China to landowners (Ching Fung and Yunei Gee Sha) along the Yangtze... View Obituary & Service Information

The family of William T. Sha created this Life Tributes page to make it easy to share your memories.

Send flowers to the Sha family.